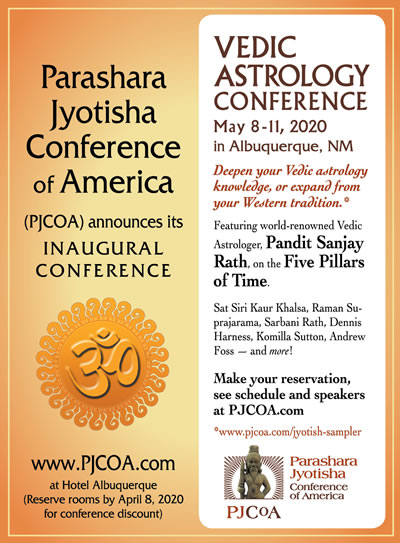 Eastern or Hindu Vedic astrology is calculated using the sidereal zodiac. The sidereal zodiac is an imaginary best of 360 degrees, which like the tropical zodiac is divided into twelve equal parts. Each twelfth part (of 30 degrees) is called a sign or “rasi”. Vedic (Jyotisha) and Western zodiacs differ in the method of measurement. Jyotisha uses primarily the sidereal zodiac in which stars are considered to be the fixed background against which the motion of the planets is measured.

Western astrology uses the tropical zodiac in which the motion of the planets is measured against the Sun on the spring equinox. The difference becomes noticeable over time. The origin of the imaginary or ecliptic belt has shifted by approximately 23 degrees. As a result, the placement of planets in the Vedic system is consistent with the actual zodiac, while in western astrology the planets fall into the following sign, as compared to their placement in the sidereal zodiac about two thirds of the time.